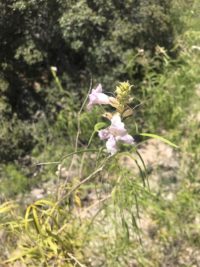 Why a post about Las Vegas on an orthodontic blog?

For a couple of reasons. Most importantly, I don’t expect folks to want to read post after post about tooth movement, retainers, or self-promotion. Due to my passion for travel, I love hearing patients and colleagues share interesting tales about their vacation experiences, so I thought I’d share mine. I’m visiting my son in Las Vegas, and when the topic of Vegas is raised, folks tend to either light up or scowl. Though I’d rather visit one of the local surgical centers than casinos, so if you’re one of the aforementioned scowlers, this post will provide options. 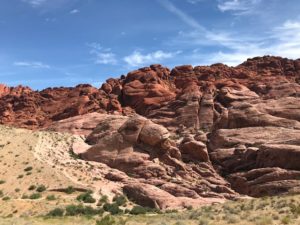 Red Rock Canyon lies just west of the Summerlin neighborhood of Las Vegas. It features a 13 mile scenic loop and 26 numbered hiking trails. The eponymous features of the park are the Aztec sandstone cliffs, formed from Jurassic sand dunes. My son and I braved the 109°F to take a few hikes among the sandstone features, and we were greatly rewarded. Surprisingly, the canyon was teaming with wildlife. Several chuckwalla lizards were seen sunning and scurrying about the cliff crevices.  A whiptail lizard meticulously dug a nest in the sand, presumably to lay eggs.

Though rain is rather rare during the summer, there is species of frog that lays eggs in the pools formed in sandstonedepressions. Their tadpoles morph into frogs in only 40 days. The image below shows hundreds of tadpoles in a small shaded pool. 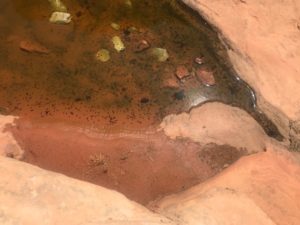 There is actually a species of shrimp that lives in the park as well–see the video below:

About an hour northeast of Las Vegas lies the awe-inspiring Valley of Fire State Park. Again, the name of this park is a tip of the hat to the amazingly colorful Aztec sandstone features that formed during the Mesozoic period. If you like geology, this is the park for you. The valley is framed by the Muddy Mountains, which consist of much older Paleozoic limestone that was thrust through and above the sandstone by means of a fault, clearly visible along the mountain range. This time, hiking in temperatures up to 110°F, we were treated to breathtaking canyon vistas. There were waves of color, including reds, oranges, and purples, as well as native American petroglyphs with recognizable mountain goats. After many hours in the desert heat, we took a nice dip in nearby Lake Mead. 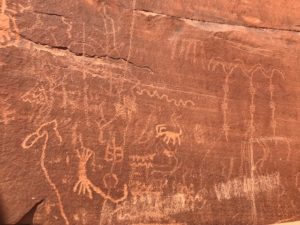 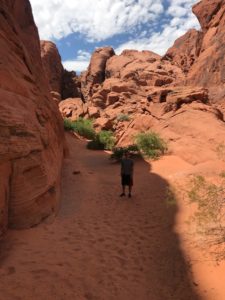 My son & I were glad that the cliffs were “throwing shade” 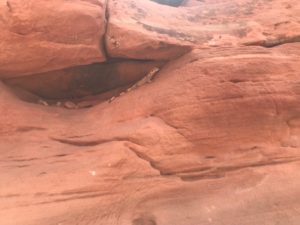 A chuckwalla lizard taking refuge from the intense midday sun.

My son and I recommend the visiting the Mob Museum when in Las Vegas proper. It features 3 floors of exhibits, some rather graphic. We were particularly interested because my grandfather, a former tailor, was once “escorted” from his shop in a Kansas City hotel, to the penthouse, and was “encouraged” to measure a local mobster for a new suit. Following delivery of the suit he was informed that this never happened and he never saw nothin’. The basement of the museum includes a functioning prohibition era replica speakeasy.

I’m happy to discuss our suggestions with you during your next visit, or you can contact me here.